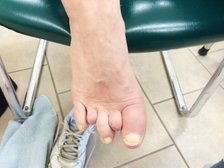 Many people visiting Castle Road ask why the Reg Hamblin stand next to the dugouts is rarely open.

The simple answer is that the shutters on the front are extremely heavy. The stand was opened up on Saturday but in lifting down one of the screens with Joner vice-chairman Phil Jones dropped one on his foot. Whilst this met with initial hilarity, his subsequent visit to A&E at Frenchay and then onwards for a Saturday evening operation at Bristol Royal Infirmary turned this into a fairly serious matter.

Replacing the shutters was a three man job for Joner, Paul Bray and Geoff Bryant. It won't be opened again in the near future!